Habitat to Build on Key Corridor

Habitat Spartanburg was met with some resistance recently as Spartanburg City Council considered a petition to rezone a half-acre parcel near the corner of Union Street and Ponce de Leon Avenue.
The parcel was donated to Habitat by the Spartanburg County Foundation for the specific purpose to create affordable housing opportunities for low-income, deserving families.
During the public process to rezone the lot from R-15 to R-8 to allow for the two homes, residents of the broader 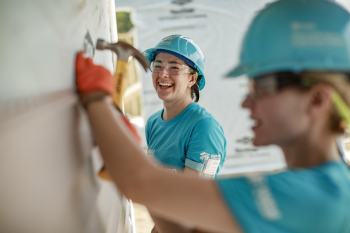 neighborhood expressed concern that the now wooded area would be "clear cut" for development. Other residents said the rezoning petition would endanger their neighborhood of similar zoning and others said the new Habitat homes would endanger the intregity of the older homes, many of which were built in the 1920s.
During Council's meeting Monday night, the City Manager and City Attorney reiterated that the rezoning would only apply to Habitat's parcel and wouldn't affect other parcels.
Habitat Executive Director Lee Close said the affiliate always strives to saves as many trees as possible when it builds and will only remove those in the footprint of the homes or those that are likely to fall.
The rezoning was ultimately approved by council, with Councilman Sterling Anderson voting in opposition. Councilwoman Ruth Littlejohn said the affordable housing opportunities are exciting for new Habitat families, and the City, as the City looks for ways to make housing options available for working families.
Assistant City Manager Mitch Kennedy said following the meeting that in this case, Habitat cleared the way for other affordable housing developers to consider areas of the City.
"If we are serious about affordable housing, these types of discussions are important," Kennedy said.
Council must approve another reading of the ordinance before its enacted.

OPINION: What Brings the Habitat Team Together

Renewed Hope in the Days of COVID-19