The story of Elmer and Ana Servando and their two daughters is one of faith, perseverance and true grit. 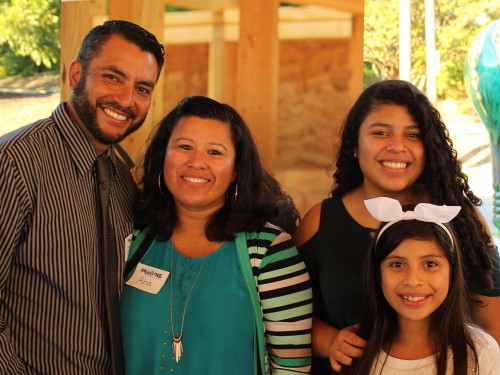 Elmer and Ana Servando were born in El Salvador, but met when they were in school in California. After they married and had two children, Amy and Natalie, they decided to move to South Carolina to be closer to family and to escape high living costs in California.

“At that time, we were living in a one bedroom mobile home in California, and wanted to make the move to South Carolina,” Elmer said. “Looking back now, it was the best move we ever made.”

With their children in tow, Elmer and Ana moved to South Carolina and lived with Ana’s brother and family in a small, older home in Spartanburg.

“We were so grateful that he opened his home to us,” Ana said. “It was not easy for them to welcome four people in, but they did it and we were so happy to be close to family, but it was hard.”

For a year, Elmer, Ana, Amy and Natalie lived in a “tiny room” where 5-year-old Natalie slept in a twin bed, 12-year-old Amy slept on an air mattress and Elmer and Ana slept on a mattress on the floor.

“It was a challenge for us, I think that was the coldest winter we had,” Amy said. “My brother and his family opened a door for us when we needed help and we had dreams of buying a house, but we didn’t know how to take the first step.”

Ana Servando was already familiar with Habitat for Humanity and decided to attend an information session offered at Spartanburg Medical Center.

“We got the information and we prayed – there were some other requirements we had to meet so at first, we prayed out to the Lord that he would make a way for us and he did,” Elmer said.

They completed an application and three months later, they received a call that they had met the qualifications.

“I remember where I was when Dad called and said we had been approved,” said Amy, now 15. “That was the start of a new beginning for us.”

The Servandos didn’t stop praying – they started their sweat equity, the time a family must spend working on a construction site or in the ReStore – and they fell in love with the Habitat at Regional neighborhood near the hospital where Habitat homes were being built.

“We didn't’t know where our house would be, but we knew there was a strong possibility it would be in this area,” Elmer said. “I remember before we knew which lot our home would be built, we pulled over and prayed near this corner lot…We really wanted a corner lot, although we would’ve accepted any lot.”

Not long after that prayer, the Servandos learned their house would be built on the same corner lot where they had pulled their car over and prayed.

The Servandos worked hard to get their sweat equity hours completed as Elmer juggled his job at Proset Plastics. They grew close to the volunteers, often cooking food for those working on their home.

The Servandos closed on their home in December 2014 – just in time to celebrate Christmas.

“The Lord opened a door for us and we are forever grateful,” Elmer said.

Elmer’s job at Proset Plastics is going well, and Ana works for Grace Management – Amy is a student at Spartanburg High School and is enrolled in the Spartanburg County Early College High School – a program where students earn college credits while in high school. When Amy graduates, she will also have an Associate in Arts degree.

Natalie, a fourth grader at Mary H. Wright Elementary, is excelling in school.

“I tell everyone how proud we are of our two girls,” Elmer said. “Having a safe place where we can live and have a happy place to share is indescribable. Habitat has given us more than our own home – they have given us hope and we want to share our story so others can have the same hope.”