Tenisha Parks remembers the moment she let go of fear and turned her family’s future over to God. 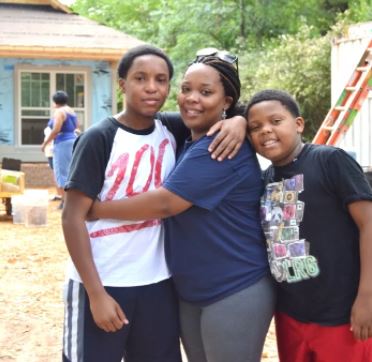 For seven years, Tenisha and her two sons lived in government housing where the boys shared a bedroom and went to sleep with sounds of neighbors fighting and,  on some nights, gunshots in the background. Beer cans and drug needles were strewn throughout the complex.

When she was growing up, Tenisha said her family moved at least six times during her elementary school years. Stability, she said, was not a priority, but a goal she had for her own sons.

“I decided in that church to let go of the fear I had,” Tenisha said. “I had a $700 title loan hanging over my head, I was working two jobs and I was letting doubt control me.”

Tenisha came to Habitat Spartanburg and received a referral to a credit union to free her of the title loan burden and started on her months-long journey to owning a new home.

“I came to the realization that God didn’t intend for me to live up under government rent,” Tenisha said. “God wants more for me. God wants me to be a homeowner. God intends for me to leave this house to my kids one day.”

Without telling her family members she had applied, Tenisha juggled two jobs and kept her work clothes in her car so she could work on her house as much as possible. Before the foundation was poured on her home, Tenisha buried a scripture under the ground and declared her house would be built on Christ’s Solid Rock.

After her house was framed, she decided to show her sons their future home. They parked on the main road and walked to the house, still under construction. They saw her photo, and biography, on a house information sign in front of the home.

Carlos and Camron were stunned. They couldn’t believe that volunteers – people they didn’t know – would give their time to build a house for them.

“It’s hard for me to put into words what this house means,” Carlos said. “We’ve been through so many struggles, but I know my mom has sacrificed for us.”

“They’ve heard my doubts. They’ve heard me say we can’t have this or that because I need a little more money, or I need another job,” Tenisha said. “They’ve seen me fill out applications for (rental) houses and get denial letters. But we know now that God had a greater plan for us….A house we call ours.”

In September, the Parks family moved into their beautiful, three-bedroom house in Duncan Park. Carlos and Camron have their own rooms and gather in Tenisha’s room every night for a devotion.

“I’ve watched them mature during this process,” Tenisha said. “I’ve watched their attitudes change. They want to cut the grass and take care of this house because it’s theirs.  They’re grateful for what we have because they’ve seen the other side.”

Tenisha has watched her youngest son’s grades and behavior improve, which she credits to living in a healthy neighborhood with positive influences. She watched their confidence grow, as they invite their friends over.

“Every part of our family structure has improved,” Tenisha said. “I can’t say enough about the volunteers and how much it means to me that people give, they pay it forward, so other people can experience this, too.”

Tenisha and her family are one of seven families Habitat Spartanburg will serve this year. We depend on your gift to make their dreams of homeownership a reality.

A Habitat home is a gift, but it’s not free. Families perform sweat equity, make a downpayment and have a low-interest mortgage they must pay every month.

Habitat Spartanburg has been blessed by a wonderful, giving community that believes in helping neighbors. Help us continue our work and building strong, healthy communities.